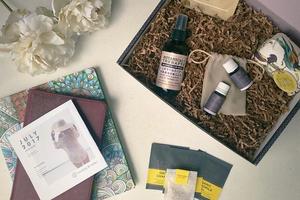 melanie711
I signed up for a 3 mo sub + a free mystery box. My mystery box came with this awesome metal roller that you put in the refrigerator and use to ease muscle pain or migraines, etc. However, the roller came in a box that was torn, dirty and smashed. The roller wasn’t wrapped in anything. It literally looked like it had been on the warehouse floor and kicked around for 6 months. I threw it away because there was no way I was going to use it. I wrote an extremely polite letter to let them know my experience and that the shipping box arrived in perfect condition. I even included pictures. I thought they’d want to know as business owners because I would! She told me it happened in shipping. I, once again, explained that the shipping box arrived in perfect condition. I truly wasn’t asking for anything but she offered to replace it. A few weeks later I decided to take her up on her offer because my daughter said she would have loved it. I wrote her and she told me to let her know what size box I’d be using to return it so she could send me a label. First, I have never heard of a company asking for dimensions of a box for return labels. Second, I could not believe she was asking me to return this nasty roller. What were they going to do with it? She went on to basically call me a liar. She stated they would NEVER send out a product in that condition. I just dropped it at that point. **Update: I was charged for another 3 month subscription that I didn’t want so I wrote to explain I wanted to cancel. Two people got back to me within 5 minutes saying that it had been canceled and refunded. I thought that was beyond fantastic. Also, I need to add, I did enjoy many of the products I received.
Shipping
Customer service
Retail value
Quality of products
Curation
Ease of canceling

Izzy
I like that it is cruelty-free; but I did not feel that I got my money's worth for the MINI box with what I received. Their own brand of essential oils (2), small pair of earrings, notebook, friendship cards, bag of nuts, gum, lip brush, and an accessory for a water bottle- at almost 40 dollars w/tax+shipping. The customization also did not work and I contacted CS; they are sending me a replacement of what I originally picked out. So their cause is good, the customer service is good; I just feel that for the money I did not get a great deal and the customizing was off. If anything better off getting the premium box but it is outside my budget.
Shipping
Customer service
Retail value
Quality of products
Curation
Ease of canceling
Must be logged in to write a review.